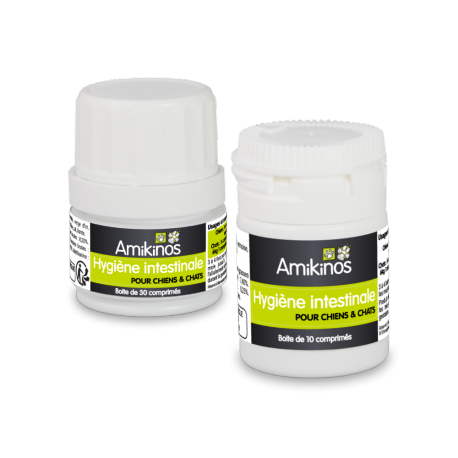 Hygiène intestinale (pills) is a natural alternative to regular chemical worm medicine. It is made from plant extracts

It eliminates unwanted parasites from the gut.

Hygiène intestinale (pills) does not irritate the bowels during the elimination of worms. It does not destroy the gut flora.

To be given 3 to 4 times a year or if you suspect the presence of parasites.

For puppies, the ideal is to give every month until 1 year.

To be given directly or mixed with food. Product usable during breastfeeding and for very young children. Do not give during pregnancy.

If you want to give Hygiène du foie in addition to Hygiène intestinale, then we recommend the following protocol:

In case of giardia or tapeworm:

Give the number of tablets indicated for the weight of your dog or your cat every 15 days for 3 months.

Goldenrod (Solidago virgaurea L.)
It is a natural anti-diarrheal, with in addition a depurative and diuretic action.

Tansy (Tanacetum vulgare)
This wild plant has been cultivated for its external and internal antiparasitic properties for humans or animals. It fights effectively against intestinal parasites (anthelmintic).

Mugwort (Artemisia Vulgaris)
Known for its deworming properties, it is also traditionally used in Chinese medicine.

Squash (Cucurbita Maxima)
Its seeds are known for their great effectiveness on roundworms and taenias.

Beer yeast
It is rich in essential nutrients: amino acids, group B vitamins have a beneficial effect on the reconstitution of the intestinal flora. It promotes intestinal regulation as well as the elimination of toxins generated by free radicals.

Garlic (allium sativum)
Garlic has recognized antiparasitic properties. It is traditionally used in prevention against intestinal parasites, in particular Ascaris (Ascaris lumbricoides) of the small intestine and pinworms of the rectum. It also has antiviral and antibacterial properties.


Unlike some chemical molecules, Intestinal Hygiene is not irritating to the intestinal system.

Hence the interest of this natural product that can be used several times a year in order to replace the dewormer, of course, but also to allow optimal assimilation of nutrients.